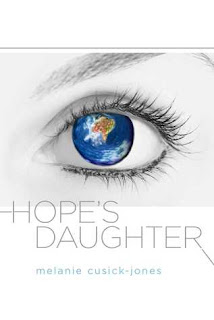 Title: Hope's Daughter
Author: Melanie Cusick-Jones
Published by: Bookbaby{ in E-book form only}
Genre: YA, Romance, Dystopia
Favorite Quote: “It’s shocking to me that boys are where your thoughts are focused at this time in the morning, so unlike you.”
Ami laughed off my sarcasm. “No need to be so grumpy, just get some make-up on those bags and you’ll be fine.”
“Sure, sure,” I agreed without enthusiasm.
“Oh! I know what I wanted to tell you – you’ll never guess who Thomas is chasing after now…”
Hmmm, never guess or can’t be bothered to guess – it was a hard call. I yawned again, glancing at the bed, which was inviting me to clamber back inside and pull the sheet over my head. So tempting, but not practical.”

Blurb: For the small population of Earth survivors who live on the Space Station Hope everything they do is planned and scheduled, down to the cyclical food menus, their roles in the station, even how many children they have.

Despite rigid controls directing her life, Cassie feels more out of synch than ever and worries she won’t find a place for herself within the station community. Perhaps that’s because she’s hearing things inside her head that can’t possibly be real. Or maybe it’s the regular elopements of her peers, heading off to a romantic future in the Married Quarter of the space station, whilst she’s never even been attracted to a boy – no matter how hard her best friend Ami pushes them at her. Then there are the odd questions her work placement partner Balik keeps raising. His questions are just as troubling for her as his distracting smiles and eyes that seem to see inside her.

As Cassie draws closer to Balik she finds that everything else in her life begins to shift. He tells her things that call into question the system they live within. She can't believe he is right, but at the same time she finds it hard to deny the sincerity of his ideas. Could there be a connection between Cassie’s problems and Balik’s questions? The truth will drag them both to a terrifying and deadly conclusion beyond anything they could have imagined.

My Review:
This book was given to me by the author, Melanie Cusick-Jones, in exchange for an honest review.
Hope's Daughter is a Sc-fi dystopia with a surprisingly sweet romance.The main character Cassie lives in a space station with the last of Earth's survivors. Cassie is like any other teenager in the station except for the fact that she hears voices in her head. She hides this fact becasue she thinks somethingis wrong with her, however when she meets Balik he helps open her eyes and makes her realize it might the space station is not all that it seems...
The Romance:
The romance in this book is a perfect show of first love, its awkward, weird, and incredibly sweet. Balik and Cassie complement each other and when you read thier interactions it kind of puts a goofy little smile on your face. I like this because even if their in a space station away from earth more than 30 years in the future they still love like an teenager. Both these characters are very well thought out, they each make each other think in ways they never did before. Balik brings out  a braver stronger Cassie, while she brings out a softer sweeter Balik.  They are just adorable!
The Plot: The plot starts out  slow and calm and then WHAM! The plot suddenly speeds up and becomes a fast pace and exciting your always wondering whats the secret of the Space Station????? This book really keeps you keeps you on your toes until the every last page. This book is not predictable either so you really don't know whats going to happened next!

There was only one thing that kind of bothered me: I really didn't like how much Cassie doubted herself  everything that happened to her she would always try to make an excuses for which got annoying fast. But don't let that stop you from reading this book!

Beza
Hey there book lovers of the world, welcome to my blog! I'm a sagittarius,tea addict, and hater of long reviews{well writing them anyway...}

Series I can't live without: